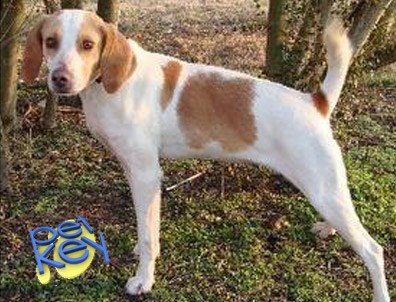 Treeing Walker Coonhounds resemble a Basset hound, with its long ears and square muzzle. It has straight forelegs, a sloping muscular body, with its tail held high. This breed has a clear, ringing bark or steady chop with a noticeable change when it has cornered its prey.

This coonhound can be tri-colored of black, white, and red or bi-colored.

The Treeing Walker has been known to be high-strung, however it is highly trainable and aims to please. It is primarily a hunting dog, however it is still an excellent choice for a family pet; it is good with children and other pets. They love to nest and cuddle.

The Walker Coonhound has a long history, and is considered to be an old American breed. They first appeared by crossing Irish, English, and French hound lines in order to create the ideal hunting and tracking dog. Early American settlers used WalkerÆs in fox hunting and, as their name suggests, raccoon hunting. They were also used in big game hunting in the American West and parts of Texas. The breed has been owned by such prominent Americans; like first President George Washington.