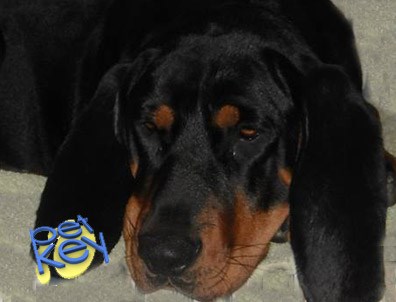 The Black and Tan Coonhound is first and fundamentally a working dog, a trail and tree hound, capable of withstanding the rigors of winter, the heat of summer, and the difficult terrain over which he is called upon to work. Used principally for trailing and treeing raccoon, the Black and Tan Coonhound runs his game entirely by scent. The characteristics and courage of the Coonhound also make him proficient on the hunt for deer, bear, mountain lion and other big game.

The color is coal black with rich tan markings above eyes, on sides of muzzle, chest, legs and breeching, with black pencil markings on toes.

Even temperament, outgoing and friendly. As a working scent hound, must be able to work in close contact with other hounds. Some may be reserved but never shy or vicious.

The Black and Tan Coonhound is descended from the Foxhound and Bloodhound. They were known in the United States long before they were granted recognition in 1945. Black and Tans were the first coonhound to be considered a separate breed from the Foxhound, and were used to track game in the 1700s. They were also used as Man-Trackers, used by Army Scouts to track criminals.