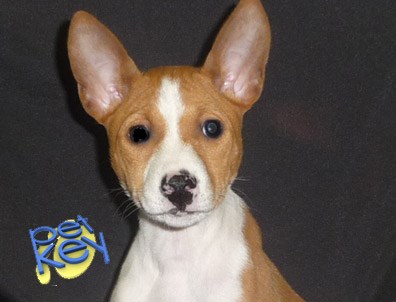 The Basenji is a small, short haired hunting dog from Africa. It is short backed and lightly built, appearing high on the leg compared to its length. The wrinkled head is proudly carried on a well arched neck and the tail is set high and curled. Elegant and graceful, the whole demeanor is one of poise and inquiring alertness. The balanced structure and the smooth musculature enables it to move with ease and agility. The Basenji hunts by both sight and scent.

An intelligent, independent, but affectionate and alert breed. Can be weary of strangers.

The Basenji has had a long history in the African Congo, as well as in Egypt. They have been depicted on ancient tombs of PharaohÆs dating as far back as 3600 BC. Basenjis were initially bred to hunt and track lions across the vast land of Africa. The Basenji first left its native home in the 1937, and today is still considered to be an exotic and rare breed of dog.