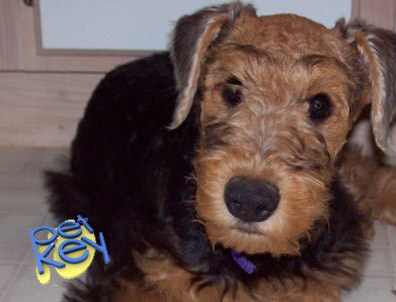 The Airedale Terrier is a large terrier with a harsh wiry coat, long flat head, and a deep chest. Its hair is bristly and resistant to dampness, but it needs stripping. The well-balanced dog stands square, with a level top-line and very straight front legs. The v-shaped ears fold slightly to the side and forward. The nose is black. The teeth should meet in a level or scissors bite. The tail is carried high and is customarily docked

The Airedale Terrier originated in the city of Airedale in Yorkshire, England in the 19th century. Airedales were called the King of the Terriers because of their size. They were considered to be the largest of the Terrier group at the time. Even despite the Airedales size, they were known best for the hunting of small burrowing game and water retrieval. Today, the breed has been also used as a police dog, army sentry, watchdog, family companion, and competitive obedience.