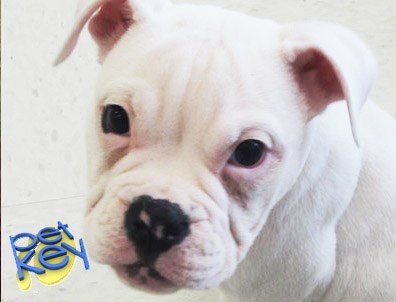 The American Bulldog is a very muscular, sturdy dog with a large, powerful head and jaws. He is very strong, but agile and light on his feet. The chest is wide and the muscular neck tapers from shoulders to head. The neck may have a slight dewlap. The head is square and broad with muscular cheeks and a furrow between the rounded eyes. The strong muzzle is shaped like a box.

The short, harsh coat comes in combinations of solid or varying degrees of white, all shades of brindle, brown, red, or tan.

The American Bulldog is a brave and determined, but not hostile dog. Alert and self-confident, this breed genuinely loves children. It is known for its acts of heroism towards its master.

The American Bulldog has a long history, pre-dating its arrival in the US. Originally, there was only one breed: the Bulldog. This Bulldog type has been known in Europe, predating the time of Caesar. The American Bulldog of today, though they share lineage, are vastly different from the original dog; much gentler and loyal, yet still retaining its strength and tenacity.