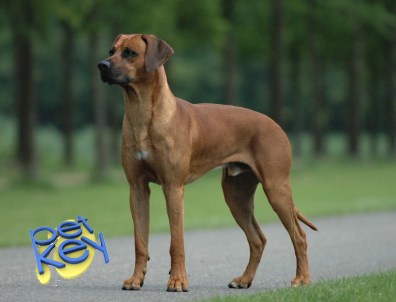 The Ridgeback represents a strong, muscular and active dog, symmetrical and balanced in outline. A mature Ridgeback is a handsome, upstanding and athletic dog, capable of great endurance with a fair (good) amount of speed. Of even, dignified temperament, the Ridgeback is devoted and affectionate to his master, reserved with strangers. The peculiarity of this breed is the ridge on the back. The ridge must be regarded as the characteristic feature of the breed.

Ridgebacks are loyal and intelligent with a dignified and even temperment. They are often aloof with strangers and do require good socialization from puppyhood.

The Rhodesian Ridgeback is an old breed, originating in Africa. They were bred from the Hottentots; an ancient hunting cur in Africa, Great Danes, and Greyhounds. Rhodesians are a newer breed, only having a history that dates back to the 1920s. They were primarily used to hunt gazelle, lions, and other game native to Africa. Rhodesian are adept at hunting in packs or singularly.