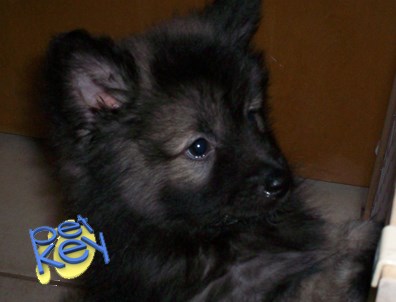 The Keeshond (pronounced kayz-hawnd) is a natural, handsome dog of well-balanced, short-coupled body, attracting attention not only by his coloration, alert carriage, and intelligent expression, but also by his stand-off coat, his richly plumed tail well curled over his back, his foxlike expression, and his small pointed ears. His coat is very thick around the neck, fore part of the shoulders and chest, forming a lion-like ruff-more profuse in the male. His rump and hind legs, down to the hocks, are also thickly coated, forming the characteristic "trousers." His head, ears, and lower legs are covered with thick, short hair.

A mixture of gray, black and cream. This coloration may vary from light to dark. The hair of the outer coat is black tipped, the length of the black tips producing the characteristic shading of color. Puppies are often less intensely marked. The undercoat is very pale gray or cream.

The Keeshond is neither timid nor aggressive but, instead, is outgoing and friendly with both people and other dogs. The Keeshond is a lively, intelligent, alert and affectionate companion.

The Keeshond originated in Holland and was the mascot for the middle and lower class Dutch rebels in the 18th century. By the end of the rebellion, the Keeshond breed lost popularity and almost became extinct. By 1920, however, Baroness von Hardenbroeck found the remaining Keeshonds and began a breeding program, and singlehandedly revived the breed.