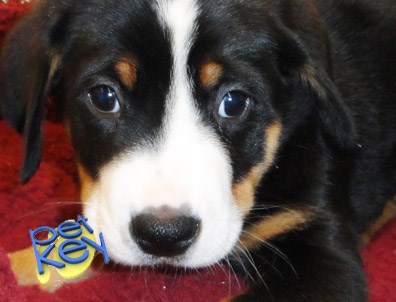 The Greater Swiss Mountain Dog is a Draft and Drover breed and should structurally appear as such. It is a striking, tri-colored, large, powerful, confident dog of sturdy appearance. It is a heavy boned and well muscled dog which, in spite of its size and weight, is agile enough to perform the all-purpose farm duties of the mountainous regions of its origin.

The topcoat is black. The markings are rich rust and white.

The Greater Swiss Mountain Dog has a reputation of combining protectiveness with a gentle nature, particularly with respect to its love of its family, especially children. They are bold, faithful, willing workers who are both alert and vigilant.

The Greater Swiss Mountain Dog shares itÆs lineage with the Bernese Mountain Dog. They have been known for nearly 2,000 years, and were at one time, more popular then the St. Bernard. GSMD were used on the St Bernard Pass, pulling carts to market and even helping find lost people.