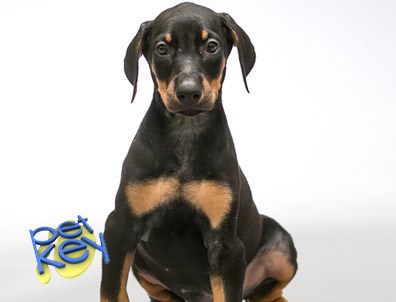 The appearance is that of a dog of medium size, with a body that is square. Compactly built, muscular and powerful, for great endurance and speed. Elegant in appearance, of proud carriage, reflecting great nobility and temperament. Energetic, watchful, determined, alert, fearless, loyal and obedient.

The Doberman Pinscher originated in German, in the town of Apolda in 1890. They were named for Karl Friedrich Louis Dobermann. Dobermann was a tax collector who also ran the local dog pound. Dobermann used the pound as his breeding ground, and from there the Doberman Pinscher emerged. It is believed the several breeds were used to create the Dobermann; including the Greyhound, Great Dane, Weimaraner, and the German Shorthaired Pointer.