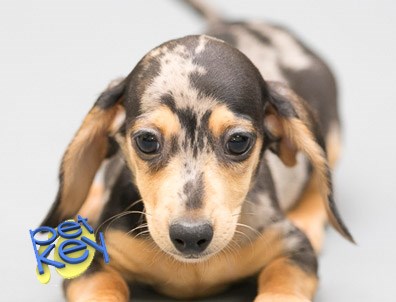 Low to ground, long in body and short of leg, with robust muscular development; the skin is elastic and pliable without excessive wrinkling. Appearing neither crippled, awkward, nor cramped in his capacity for movement, the Dachshund is well-balanced with bold and confident head carriage and intelligent, alert facial expression. His hunting spirit, good nose, loud tongue and distinctive build make him well-suited for below-ground work and for beating the bush. His keen nose gives him an advantage over most other breeds for trailing.

Lively and affectionate; proud and bold, almost rash. Tenacious. Can be willful and clownish. Curious and mischievous, they are very clever and may attempt to train the owner rather than allow the opposite. Devoted to his family, some fanciers feel the long-haired variety is calmer thanáthe other two types. The wire-haired variety is more outgoing and clown-like. All are slightly difficult to train.

Though Dachshunds are considered a German breed, they have been traced back to Ancient Egypt. Dachshunds have been linked to many royal families in Europe for many years, Queen Victoria being their biggest fan.