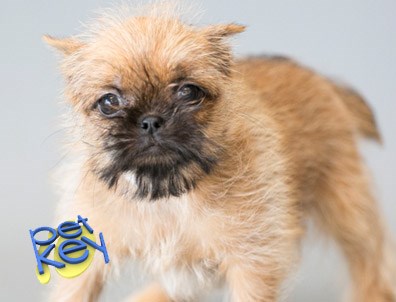 A toy dog, intelligent, alert, sturdy, with a thickset, short body, a smart carriage and set-up, attracting attention by an almost human expression. There are two distinct types of coat: rough or smooth. Except for coat, there is no difference between the two.

Either 1) Red: reddish brown with a little black at the whiskers and chin allowable; 2) Belge: black and reddish brown mixed, usually with black mask and whiskers; 3) Black and Tan: black with uniform reddish brown markings, appearing under the chin, on the legs, above each eye, around the edges of the ears and around the vent; or 4) Black: solid black. Any white hairs are a serious fault, except for "frost" on the muzzle of a mature dog, which is natural.

The Brussels Griffon originated in Belgium, and is named after the capital city. They are believed to be developed from the Affenpinscher and Belgian street dog in the 1800s. Griffons began as stable dogs that kept vermin out of the barns, and for guarding stage drivers in Brussels. Due to their outgoing, playful personality, the GriffonÆs easily moved from working, stable dog to house pet of nobility.