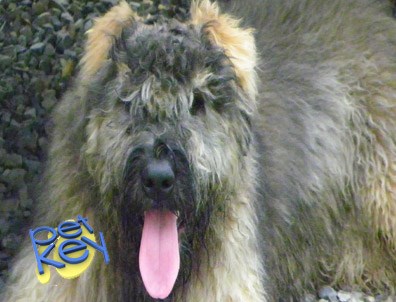 The Bouvier des Flandres is a powerfully built, compact, short-coupled, rough-coated dog of notably rugged appearance. He gives the impression of great strength without any sign of heaviness or clumsiness in his overall makeup. He is agile, spirited and bold, yet his serene, well behaved disposition denotes his steady, resolute and fearless character. His gaze is alert and brilliant, depicting his intelligence, vigor and daring. By nature he is an equable dog. His origin is that of a cattle herder and general farmer's helper, including cart pulling. He is an ideal farm dog. His harsh double coat protects him in all weather, enabling him to perform the most arduous tasks

From fawn to black, passing through salt and pepper, gray and brindle. Sometimes a small white star on the chest is there.

The Bouvier is an equable dog, steady, resolute and fearless.

The Bouvier des Flandres origins trace back to Belgian pre-World War I. They were bred to be herd guards and watchdogs for cattle. The long shaggy black dog of Flanders became the national symbol of Belgium. Their bravery became legendary, their work ethic unmatched by any breed. Between World War I and World War II the bouvier was trained and used extensively by the police and military.